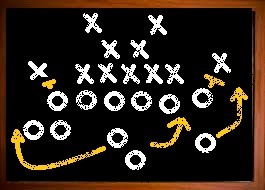 I was recently reflecting on and inspired by an article I read by Ross Kingsland which was published over a year ago on the topic of the Emotional Intelligence myth in leadership.  His article focuses on the role of the leader and whether or not emotional intelligence (or EQ) has any measurable effectiveness in the area of leadership.   In fact he even points out that the entire application of Emotional Intelligence in leadership as a discipline is only mentioned a single time in the original research done by Daniel Goleman.

One thing that you must understand is that on the weekends I become a voracious consumer of information and data.  Its that quiet time of the week when the pressing issues and challenges of my day job subside just enough to allow for additional thought expansion. Whether that data and information is work or industry related, or an area that I just have personal passions in,  it doesn’t really matter.   To me each idea has a specific shape.  Its own mass.   For me to really consume it, understand it, agree and/or disagree with it, it must process in my brain as a three dimensional object.   There I have to play with the shape.  Explore it.  Challenge it.  Stretch it.  Apply my own life experience and pre-conceived opinions against it.  Its like a blob of silly putty and I play with it for as long as I need to until I get value and enjoyment from it.  If truth be told, more often than not, I get more value and enjoyment from the process itself than the revelations I may or may not come up with.

While not specifically technology focused, the article itself challenges whether or not a leader’s specific measurable EQ has an impact on organizational effectiveness or end results. I prefer to think of EQ less as a sole measure and more of a “trait with weight” that is influenced and regulated by other environmental factors.  The individual leader’s trait is but a voice (and more importantly an ear) in the cacophony of the environment. Their individual trait interacts with what I will call organizational receptors to determine its ability to successfully impact it or not.  Much like an athlete with raw natural talent must practice and engage situationally to hone their craft.  It does not matter if the athlete can throw a ball 80 yards with exacting precision, if he cannot do it when his opponents are closing in on him from all sides, he will fail.

When it comes to the combining the concepts of leadership and EQ all of the conversations I have experienced focus too much on the leader as a lone agent. I believe it has more to do with the leaders interaction within their own specific eco-system and their experience in managing the combined tactical and EQ environment of their teams.

Its through this lens that I believe that Leadership EQ begins to matter…and I do think it matters.  The caveat is that it matters experientially based upon where in the hierarchy you sit, the function one delivers, and the results expected by the task.  Additionally EQ has as many inputs as outputs and together they can become cumulative in ultimately creating or reflecting a set of expectations and results not immediately appreciated in the environment.

Interestingly I have also come to the belief that an individual leader’s EQ becomes less relevant the higher in the hierarchy he or she achieves specifically in organizations that experience “normal” levels of stress or pressure in the system.  I would also posit that organizations going through “significant or elevated” levels of stress actually prefer a lack of measureable EQ in the highest levels of leadership which reinforces Kingsland’s ‘Hero’ observations. However, even in those situations, those more localized team leads in an organization must still have those EQ talents if the organization is to deliver successful results.

These are important factors to consider especially when leading an organization through change and selecting and understanding your leadership team and management chain.

What is Emotional Intelligence or EQ Anyway?

The Wikipedia definition of EQ is defined as :

“the ability to monitor one’s own and other people’s emotions, to discriminate between different emotions and label them appropriately and to use emotional information to guide thinking and behavior.[1] Emotional intelligence also reflects abilities to join intelligence, empathy and emotions to enhance thought and understanding of interpersonal dynamics.”

I wont go into the various EQ models or the complexity of the debate by those much smarter than me in this space.  My position is more observational and it focuses more on the different environmental representations and reflections in the modern workplace.  Its less about an individual and more about the navigation of the leader in a complex interaction of individuals and their work environments.

Having observed and participated in some fairly substantial organizational and company level turn-around activity especially in the realm of technology there seems to be a clear set of criteria or perhaps areas of awareness required for success. In my experience where groups have led change the following 10 conditions were present and where results were mixed or failed they were not.  Please keep in my that this is solely through the lens of the EQ perspective.  There are far more opportunities to fail via poor strategic or tactical decisions.  So we must pre-suppose for this chat that the strategy and tactical direction is correct or at least directionally correct.

As mentioned, I believe it is more about the interaction and observation of the leader with an overall EQ ecosystem that is additionally regulated by specific expectations of hierarchy. In short, I have ended up on the following basic tenets of observation in this space:

One might argue that this would all feed into the formal definition of a leader’s emotional intelligence.  Their ability to read the field as things develop.   In some regards that is true, but my supposition is that it is more than just their ability.  On one hand there is an ability that is both natural and experiential (to some degree even learnable if not observable) and on the other hand there is an equal force in the environment that they work in that is as dynamic, changing, and alive which represents individual EQ’s and aggregations of EQ from within the organization.   Its that delicate dance the defines the ultimate success.

In his post, Ross Kingsland asked “How is it so many people in position of power and leadership achieve this level and maintain it, despite the fact that their emotional intelligence is perceived as low?” His examples focus on Tony Blair, Barrack Obama, and even George W. Bush.   In my mind it ultimately boils down to how well they understand, listen, interact, and ultimately manage the EQs of the various organizations and institutions they lead.  Its not just about the leader.  The organizational EQ pushes back. It interacts.  It can and does change. Once higher level needs are met, the needs of the organization become more focused.  The leader must continue to dance. It is not a one and done affair.

Ultimately the leader charged with change my deploy their own strategy around the EQ.  It tests their ability to read the plays.  The teams they put in place and their ability to “fire up” or “ignite” the underlying EQ passions of the organization they lead.  If a low EQ leader knows that they have a deficiency they may compensate with hiring or promoting more ‘relate-able’ leaders underneath them.  Its a perfectly sound strategy but it takes some awareness of one’s own strengths and weaknesses.  All of Ross’ leadership examples had specific programs, plans, and targets – the tactical and strategic goals to achieve.  Their ability to execute and inspire had less to do with their own EQ as it did their strategies and interactions with the various elements of the EQ environments they worked within.

The one thing worth mentioning is that a certain EQ Cognitive dissonance occurs when organizations are in a significantly stressed state.   The tactical and strategic elements of a leaders plan can over-ride any underlying requirements from the organizational EQ if the entire eco-system itself is under strain.  An example would be if the company’s existence has been significantly disrupted or in danger of going out of business.  In that case it is highly likely to find people putting their own interests and preferences aside for the short term to save the firm.

In these cases leaders with high intelligence but low emotional intelligence are tolerated and to some degree rallied behind.  The example used in the article focused around Winston Churchill during World War Two.   During the time of extreme duress the country and its institutions fell into line behind someone with a plan and a way forward.  Once the danger had passed, the ‘organization’ eventually rejected him. Just about everyone has an example of someone who led an organization or group to achieve a great feat while presented with overwhelming odds only to ultimately be undone by those same teams once the ‘big trouble’ was eliminated.

In the end, it represents another work track that one has to be mindful of when tasked to bring about change in an organization.  For whatever reason my own personal experience has shown this to be particularly important in the Technology areas of a company.   When its deployed successfully – you achieve the mission faster, with less resistance, and ultimately with better results.  That is not to say you cannot achieve this without it, but its definitely a hard path to execute along.  Of course there is always a better than average chance I am full of …silly putty.